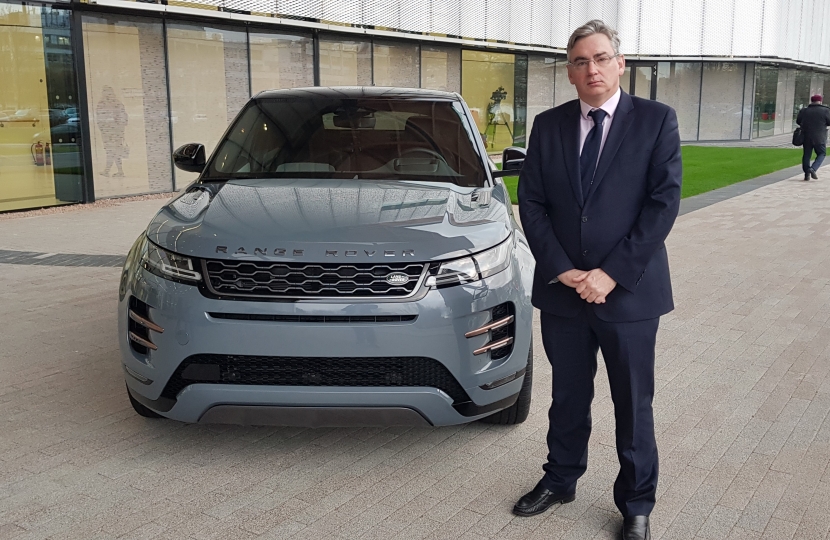 Last week I once again spoke up for the car industry and motorists across the UK. Responding to the Queen’s Speech, I urged people when they talk about emissions to have an honest and rounded debate and the need to look at things scientifically and practically.

Unfortunately, companies that are genuinely trying to be at the forefront of reducing emissions, such as Jaguar Land Rover, sometimes face moves that could damage their business and be counterproductive to the green agenda and local taxes.

I have made the point before, but it is a crucial one, millions of drivers switched to diesel cars under advice from the then Government and did so in good faith, believing that they were making the responsible choice. Reducing the trade-in or resale value of their cars actually makes it harder for diesel drivers to transition to cleaner alternatives, and that risks keeping older and more polluting models on the road for longer.

Diesel engines have made huge strides. We have the Euro 6 engines, for example, and last year What Car? magazine named a diesel car as “car of the year”. There are real opportunities in the near term to harness technology and dial down emissions.

Meanwhile, there is plenty of action that the Government can take in other areas to bring down harmful emissions in the here and now by tackling emissions in other sectors too, like construction and mass public transport.

Readers will know that last Saturday the House of Commons sat once again to debate Brexit and the agreement which the Prime Minister has reached with the European Union.

The Prime Minister’s new agreement ensures that we take back control of our laws, trade, borders and money without disruption, and provides the basis of a new relationship with the EU based on free trade and friendly cooperation.

Under the agreement we will leave the EU’s Customs Union as one United Kingdom and be able to strike trade deals all around the world.

The Prime Minister has achieved what many said was impossible and negotiated a new deal so that we can respect the referendum result and get Brexit done on 31 October, without disruption and in a friendly way.

I hope that lessons from the international stage can also be learnt on the domestic stage, that Members of Parliament can come together, get Brexit done so we can heal the divisions in society and respect one another once more.